Reverend Katsuya Kusunoki is the Head Minister of the Seattle Betsuin Buddhist Temple. Sensei was born in Nagasaki, Japan, the second son of a temple family. Today his older brother Naoya is the 17th generation of their family to serve their family temple. Sensei is a graduate of Miyazaki University where he majored in primary education and his hobby is to watch and play baseball and softball. While a college student he took a break and spent almost two and a half years in a Japanese volunteer program similar to the Peace Corps in America coaching baseball in Zimbabwe before returning to Japan to complete his studies. After graduating he spent three years teaching 3rd and 6th grade classes before deciding to become a minister.

Sensei’s advanced training includes the Hongwanji-ha Rituals course for leaders (Gonshiki). He is a Hongwanji-ha certified Special Rituals Minister, a certificate only he and our former minister Rev. Sala Sekiya hold within the Buddhist Churches of America. Sensei’s first assignment in America was to the Lodi Buddhist Temple in 2010 and he was transferred to Seattle in April of 2017. Sensei and his wife Ayano have a son, Yuiya, who was born in September 2016. “rev.kusunoki@seattlebetsuin.com” 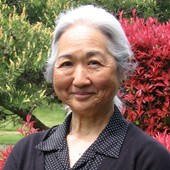 Minister’s Assistant Irene Goto became a certified Minister’s Assistant in the summer of 2011 and received Tokudo* ordination in 2014. “Through high school I attended a Christian church because there was no Buddhist temple near our home. In the mid 80’s when my daughter was in kindergarten she asked me to take her to this place called “church” so I decided to take her to the Buddhist Church. I was pleasantly surprised to find that what the ministers at Seattle Betsuin were teaching resonated with my views. I’ve been attending, participating, and listening ever since. I hope to help keep the Dharma resonating.” 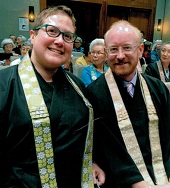 Minister’s Assistants Matt & Rosalie May were certified as Minister’s Assistants in the fall of 2013 and went on to receive their Tokudo* ordination together in the summer of 2016 at our mother temple, the Nishi Hongwanji in Kyoto, Japan. Matt works for Adobe and manages their Accessibility organization.

Minister’s Assistant Leonora Clarke became a certified minister’s assistant in the fall of 2013. She has a degree in Comparative Religions and has completed the two year Jodo Shinshu Correspondence Course offered by the BCA’s Jodo Shinshu Center. Leonora works for the University of Washington School of Medicine. 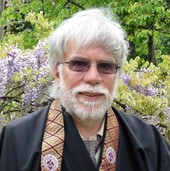 *Tokudo ordination – the first formal step of training to become a minister in the Jodo Shinshu tradition.