Register to march with the temple in the Pride Parade on June 30, 2019 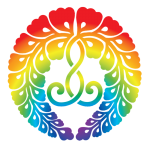 The Seattle Betsuin Buddhist Temple participates in the Pride Parade to demonstrate a spirit of openness and inclusion in sharing the Buddha Dharma with everyone and anyone.

To march with us this year, follow the link above and sign up to show your support! Registration is free but feel free to support our efforts by purchasing our rainbow themed Onenju, shirts, hats, and fans available in our temple foyer before service.

2019 marks the third year of the temple’s participation in the Seattle Pride Parade! Our group has consisted of about 100 people in recent years and is a proud part of the march. We carry a banner with our temple name and logo as well as handing out candy, fans and other rainbow themed gear. Our group dances through the streets, playing music, drumming and greeting everyone along the way.

We also bring one vehicle along with our group for those that can’t/don’t want to walk the entire time. It also carries all of our supplies and “swag”. We wear rainbow or temple themed gear to show our support and unified stance for the LGBTQ+ community.

The Seattle Pride Parade is a celebration of the lesbian, gay, bisexual, transgender, and queer (LGBTQ+) community. The parade is part of an annual nationwide commemoration of the Stonewall Riots of 1969 – the beginning of the Gay Rights movement. The purpose of these events is to inspire, educate, and commemorate diversity, and to work toward a future without discrimination.

“The Buddha’s teachings are for everyone. We strive to follow the spirit of Buddha and share the dharma with others universally. All of our BCA temples share a common teaching of openness and inclusion. Our struggle is to ensure that each of our temples expresses it. Exclusion and discrimination, even in our minds, is not justifiable. That said, discriminatory attitudes may arise. At such times, we should humbly scrutinize ourselves under the light of the dharma and sincerely receive Buddha’s guidance. Only then can there be genuine respect, enabling everyone to find a safe and welcoming place within the Buddhist community.”*

Buddhism is compassion for all people. BCA ministers have been performing same sex marriages for over forty years and have long been supporters of the LGBTQ+ community.

*Quotes are from Reverend Kiyonobu Kuwahara, Co-Director of the Buddhist Churches of America Center for Buddhist Education